He’s back… Yep, our silly elf has returned this past weekend! Boy, has he already started stirring some silly pranks around the house!  LOL!  He “showed up” Saturday morning.  I came down stairs and yelled out for Miss A to come down the stairs, I acted all surprised (I secretly had to stay up the night before to set everything up and tried to be as quiet as I could, hoping Miss A wouldn’t wake up).  She came downstairs the next morning and was so excited, yelling out for Mr. M to come downstairs to see what all the excitement was about!  All week, we had been wondering when our beloved Buster would return for his 2nd year of Elf on the Shelf; so this year, he arrived on the 1st weekend of December (as he had last year as well). 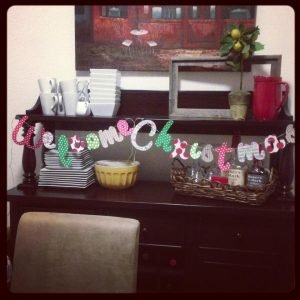 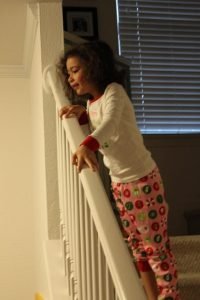 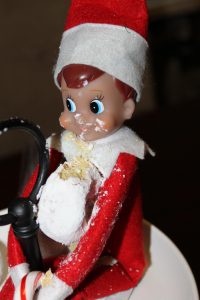 A was so excited, she was talking to Buster quietly, showing L her gifts, and looking at her own stash of goodies.  Buster had left us some goodies from the “North Pole” again (as he did last year).  Snow covered donuts, snow mallows, as well as stealing some of mommy’s stash or Christmas Oreos!  His mischief for day 1 was leaving donut crumbs on the table and “munching” on one of the snow donuts. 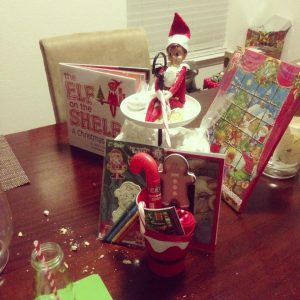 After the excitement of Buster’s return and goodies, I started breakfast and made some semi-homemade donuts (recipe from Pinterest), eggs, and bacon.  We drank milk from glass bottles (courtesy of old Starbucks frappucino bottles) and lovely paper straws (I love these cute straws)!!  L had her first try of carbs (non-sugared donuts that I had made for her), and she loved it. 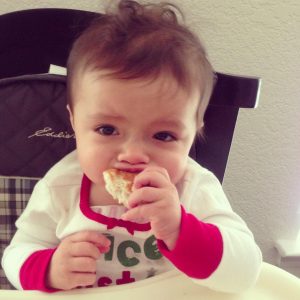 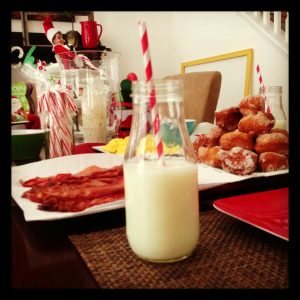 After breakfast, we started decorating the house for Christmas; as Mr. M and A decorated the tree, Lay sat and watched them both while Pandora Christmas music played in the background. 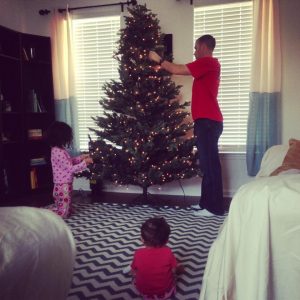 That evening, we had my sis and brother-in-law over for dinner and to watch the Georgia/Alabama game on tv.  We had so much fun watching the game (which was an awesome Sec Championship game).  Georgia, unfortunately, lost.

Sunday, day 2, we found Buster had gotten into my sugar and decided to make himself a sugar angel on my dining room table.  This silly elf sure is getting into more mischief than being a nice elf… 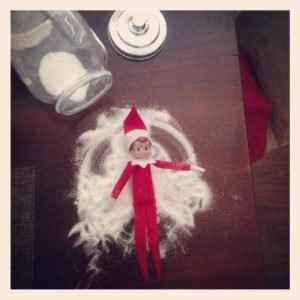 After picking up A  from Sunday school, we headed out to see some friends that lived at our previous duty station near Richmond. It was good seeing them and A got a chance to play with her friends she had not seen for awhile.

Afterwards, at a last minute whim, Mr. M decided to take me to this outdoor mall outside of Richmond.  OMG…Louis Vutton, Tiffany’s, Saks…. a girl can dream huh?  It was a nice outdoor mall, and I can’t believe we never went there during our stay at Ft. Lee!  We watched the music show that they had with the big Christmas tree they had displayed.  Sweet L and A watched with joy, while sitting next to Mr. M. 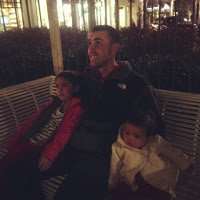 On our way home, we decided to stop by Steak N Shake.  The last time we ate at a Steak n Shake was in Georgia and who knows how long that was?  It’s def. been a long time and this was by far the closest one to us!  The girls enjoyed their dinner, including L who was happy the entire time at the diner.  Mr. M was chatting it up with a local sheriff deputy sitting next to us.  Even though our service there was poor, we still had fun just being able to get out of the house for the day! 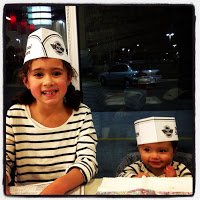 What a fun-filled weekend!  The holiday season is upon us and so many wonderful things are soon to come this upcoming weeks!  Can’t wait.  But one thing for sure, we can’t forget the Real Reason for the Season… Jesus!

Floating in the Dead Sea ✓ We couldn’t pass u

17 years ago, you chose me and we haven’t looked

Welcome to the Holy Land of Israel! Israel surpr

We’ve had several amazing views this year, and t

The oldest Christmas Market in the World, dating b

4 more sleeps until Christmas. We escaped to Dre

Wait for it…. We’ve waited 3 years for this v

It’s me, hi! This fall and holiday season, we

Pretty little Colmar, France. One of my favorite

Take me back to warm, sunny Sardinia. This gloom

A Medieval Christmas Market at a Castle ruin, comp

Let the Christmas season begin, we have officially

It’s beginning to look and feel a lot like Chris

Christmas Markets have been slowly opening up in G

This website uses cookies to improve your experience while you navigate through the website. Out of these cookies, the cookies that are categorized as necessary are stored on your browser as they are essential for the working of basic functionalities of the website. We also use third-party cookies that help us analyze and understand how you use this website. These cookies will be stored in your browser only with your consent. You also have the option to opt-out of these cookies. But opting out of some of these cookies may have an effect on your browsing experience.
Necessary Always Enabled
Necessary cookies are absolutely essential for the website to function properly. This category only includes cookies that ensures basic functionalities and security features of the website. These cookies do not store any personal information.
Non-necessary
Any cookies that may not be particularly necessary for the website to function and is used specifically to collect user personal data via analytics, ads, other embedded contents are termed as non-necessary cookies. It is mandatory to procure user consent prior to running these cookies on your website.
SAVE & ACCEPT
error:
Scroll to Top